You are here: Home / Our Animals / Chickens / How Often Do Chickens Lay Eggs? Ultimate Guide To Laying 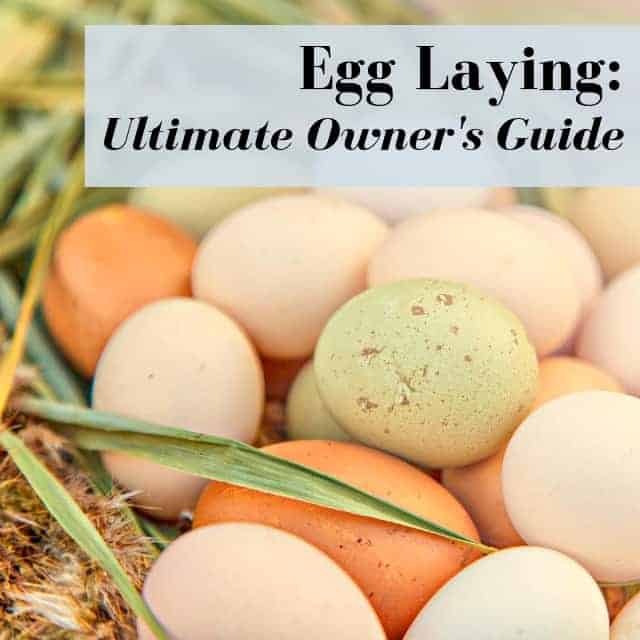 Eggs are one of the amazing benefits of having chickens in your care – along with companionship and having a coveted family pet and honorary member. But if you’re brand new to chickens, or if you’re trying to make sense of all the old wives tales out there, you might wonder “how often do chickens lay eggs anyway?”

Whenever a non-chicken person stops by the farm, I’m certainly asked this question! Well, if you’re wondering, “How many eggs do chickens lay?”, the truth is, it depends on a few factors:

Let’s take a look at each factor above, and by the end of this article, you’ll have a clearer idea of how many eggs you can expect your hens to lay, as well as things that can cause egg laying to stop.

How Often Do Chickens Lay Eggs And How Many?

Some chicken breeds are more inclined to lay eggs consistently, while other breeds aren’t. Obviously, this will effect how often these chickens lay eggs. Two extreme examples to illustrate this point are Cornish Crosses and Production Reds. These are industrial breeds; Cornish Crosses are raised for meat, while Production Reds are bred for egg laying in factory farms.

Cornish Crosses don’t lay eggs very often – when we raised them as pets, they laid one egg a week or so. They’re too heavy with too many health problems to expect any real amount of eggs. On the other hand, Production Reds and Golden Comets are bred to lay eggs no matter what – we’ve had some that laid a nice brown egg every day (yes, 7 days a week). Most breeds are somewhere in the middle – they’ll lay between 4-6 eggs a week.

Diet effects egg laying ability, and it’s frequently people who aren’t feeding their flocks a good, high protein diet who email me asking “how often do chickens lay eggs?” because they’re frustrated with their hens. When a hen doesn’t have enough protein, nutrients, or calcium in her diet, it can cause her to stop laying eggs. After all, egg laying is about reproduction – if her body isn’t healthy, the first thing her body will do is stop anything except the bare necessities to live.

A diet that includes a 16% layer feed and a calcium supplement is ideal. You can free-feed your chickens, or offer 1-2 cups of grain per hen each day. These are the best chicken feeders we recommend that make it easy to feed hens without wasting a ton of food. It’s also a good idea to supplement her diet with table scraps or treats, such as black soldier fly larvae.

Chickens will lay less in winter than they do in the spring, summer, and fall. Partly this is caused by the shortage of daylight in the winter, and partly (particularly in very cold areas) it’s caused by her body reserving calories for warmth. It takes a lot of energy to lay an egg! If she’s stopped laying from November – February, she’ll likely pick back up in March (in the Northern Hemisphere – this will be the opposite for our Aussie and Kiwi friends in the Southern Hemisphere).

Environmental stress can effect how often chicken lay eggs, so it’s always best to provide a quiet, predator free chicken coop that’s not over crowded. When a hen is stressed, the calories she eats are diverted towards supporting her body – and not to laying eggs. In some cases, when a hen is very stressed over predators, she might stop laying together for a while.

Another reason hens stop laying is if their nesting boxes aren’t up to snuff. Chickens need to feel safe when laying eggs, and if they don’t, they might stop laying. A nesting box in a quiet, dark area that’s away from the rest of the flock (and especially roosters) is idea. You can make your chicken nesting boxes out of anything that’s easy to clean. It’s also a good idea to put sweet smelling herbs in the nesting boxes – they’ll relax the hen and attract her to the nesting box (so she doesn’t lay elsewhere).

Similarly, when chickens live in crowded conditions, or she lives with competing roosters who overly mate with her, it can spike her stress levels, and she’ll go off her eggs.  It’s best to build a coop with 10 square feet of space per bird, and with lots of roosting bars for them to rest on. It’s also important to keep out predators, rats, dogs, etc, so your flock feels safe. You can check out our top free chicken coop plans here.

Chickens stop laying eggs for a variety of reasons: season, diet, and stress are some common factors. You also might think your hens have stopped laying eggs – but they’re actually hiding them! This is common with free range chickens. If your hen is broody, and is sitting on a clutch, she’ll also stop laying eggs until her chicks are hatched and able to fend for themselves (about 2-3 months). Weather also can effect egg production – if a hen is heat stressed, she will stop laying. Similarly, if she’s dehydrated, her body will shut down (you can learn how to make a DIY automatic chicken waterer for $12 here – these are a LIFESAVER in the summer!)

Hens will naturally lay eggs, but not necessarily one each day. Most chickens require about 12-14 hours of daylight each day to produce eggs, since egg laying is a hormonal response to sunlight. In addition, it can take about 24 hours for an egg to make it from the hen’s ovary,  through her oviduct and encased in calcium, to her vent, so it can be finally laid. There’s really no way to speed up this process – so it’s reasonable to expect your chickens to lay eggs every 24-26 hours. Most hens take a day or two off each week – and that’s completely natural.

You might also wonder “How many eggs per week does a chicken lay?” Truthfully, the number of eggs per week a chicken lays depends largely on factors such as their breed, nutritional intake, and environmental conditions. Most chickens are known to lay 5 eggs a week or at least one every other day, for about 300 eggs per year.

So, is it possible for a chicken to lay 2 eggs a day?

Yes, it is possible – if she lays “an egg within an egg.” This occurs when, for whatever reason, an egg that was released from the ovary doesn’t make it down the oviduct, and stays in her body for an additional length of time. Meanwhile, the ovary has released a second yolk, which is then also enveloped in calcium – along with the first egg. It’s important to remember, though, that this isn’t a typical thing – it’s really an abnormal egg.

Do Chickens Lay Eggs At The Same Time Every Day?

Even though most hens don’t lay every day, it’s certainly possible that a hen could lay eggs at the same time. However, most of the time, she won’t. Hens lay eggs every 24-26 hours – so she might lay her eggs in the morning one week, and in the evening another week. It’s a crapshoot! Ultimately, hens just follow their own rhythm, and lay when nature tells them to.

It seems like a lot of hens lay their eggs in the morning, but chickens lay eggs all throughout the day. In fact, you might see several hens fighting over the nesting box! They won’t lay their eggs at night though – they like to sleep and stay safe by roosting at night.

Is It Painful For Chickens To Lay Eggs?

There has been no clear evidence to support the claim that laying eggs hurt chickens. Of course, very large eggs laid by a very small hen might cause an issue such as egg binding or prolapsed vent, which is painful. But on average, it seems laying an egg isn’t the same as pushing out a baby every 24 hours. In fact, you’ll probably hear your hens singing “the egg song” after laying – it might just relieve them to finally pop out the egg!

Does A Chicken Need A Rooster To Lay An Egg?

No, a chicken doesn’t need a rooster to lay eggs – hens will produce their “butt nuggets” whether or not a rooster is present. This is because egg laying is a hormonal response to the amount of light – not whether she has a mate or not. If you want fertilized eggs so you can hatch chicks, then you’ll need a rooster. You can read about the best incubators we recommend here.

How Many Eggs Do Chicken Lay A Year?

To determine how many eggs a chicken will lay in a year depends primarily on the breed, nutrition provided, and the overall management of the flock. Most egg laying breeds will lay about 300 eggs per year. Here’s a chart of the more popular breeds:

How Many Eggs Are In A Chicken? Are Hens Born With All Their Eggs?

A hen is born with all the egg yolks she’ll ever have (the yolks are what’s actually released from her ovary – hens have two ovaries, but only one is functional). The amount of actual yolks in her ovaries changes from chicken to chicken – they’re individuals after all. However, most hens lay consistently for the first 3 years of their lives. Since many breeds lay about 300 eggs a year, and they don’t start laying until they’re 6-8 months old, you can reasonably expect a hen to lay about 600-1,000 eggs during her lifetime.

Although most of the time it doesn’t hurt a chicken to lay an egg, it’s completely possible an overly large egg might hurt. The vent does stretch to accommodate laying, but an egg that’s a much larger size than normal would put extra strain on the hen. However, there’s nothing you can do to stop this – egg laying is natural, and sometimes, the eggs are larger than normal because that’s nature’s way.

No – just female chickens. The male chickens, called roosters, fertilize the eggs and protect the hens and provide companionship.

How Long Is The Egg Laying Process?

The egg laying process takes about 24 to 26 hours to produce and form the egg. The process – releasing the yolk from the ovary and encasing it with albumen (white egg parts) and the shell starts again 30 minutes after the chicken has laid an egg. You can read about all the parts of an egg here.

While double yolk eggs happen frequently and aren’t anything to worry about, there’s no telling when hens will lay eggs with two yolks. Some hens lay them consistently, and some hens will only do it once in their lives. You can read more about double yolk eggs here.

How Often Do Chickens Have To Mate To Lay Eggs?

Hens will lay eggs regardless of whether they mate with a rooster or not. If you want to hatch chicks, however, you will need a rooster to fertilize the eggs. You can read about how chickens mate right here.

What Do Chickens Do With Unfertilized Eggs?

If the hen is “broody,” meaning she wants to hatch eggs, she’ll sit on them even if they’re not fertile. If the hen isn’t broody, she’ll just leave the eggs in her nesting spot and go on with her day. Sometimes, hens will eat their own eggs, especially if their diet isn’t already sufficient, or if they’re bored.