Have you ever wondered “How do chickens mate?” Well, I can tell you it’s not like people.

In fact, if people mated like chickens, it would be odd indeed.

One of the fun (or not so fun) things about being on a farm is you get to see animals mating. A lot.

Chickens mating are no exception.

In fact, chickens mate so much that it can cause problems with your hens if you’re not careful, particularly if you have multiple roosters.

The first thing you should know about how chickens mate is that hens don’t require a rooster to lay eggs.

They do it naturally once they reach the right age, and will lay an egg every 26 hours or so.

But how do chickens mate?

It all starts with a chickens mating dance. The rooster circles a female while scuttling his feet with his wings stretched down. He’ll also scratch the earth. It’s his way of propositioning the hen and marking “his territory.”

If one of your girls wants to mate, she will squat on the ground and allow the rooster to mount her.

Now, as for how do chickens mate, the actual event itself is brief and rather brutal.

The rooster mounts the female, and usually grabs the top of her head near her comb. He then stands on her back, and lowers his cloaca.

You might hear the hen squawk or sound distressed. That’s normal, and only a cause for concern if she is actually hurt.

The hen, meanwhile, inverts her vent, and the chickens touch cloaca.

The male’s semen is transferred to the female. It makes its way up her oviduct where it hopes to eventually fertilize an ovum.

Once the mating process is complete, the hen will rise, shake her feathers, and go on doing whatever she was doing before she was mounted.

The semen can live up to a month or so inside her oviduct.

It’s important to remember that when chickens mate, even if your girls are inseminated, they might not produce fertile eggs immediately.

If you have a rooster, that’s probably not too much of a concern, since chickens mate several times a day.

There have been reports of hens that haven’t been exposed to a rooster in the past month or so (the family got rid of the rooster, for example), but she still produced fertile eggs.

So, if you want to incubate eggs, don’t worry. You’ll be flush with fertile eggs in no time.

If you are worried about getting fertile eggs when your chickens mate, offer vitamin E-rich foods such as spinach or swiss chard.
Studies show that roosters fed a diet high in vitamin E showed increased fertility.

Something you might not know is that chickens mate for reasons other than reproduction. (Further reading: Can Chickens Lay Eggs without a Rooster?)

It’s also something they do socially, as a way to establish a hierarchy.

Chickens have strict social orders, with the rooster at the top, then the hens, then the younger pullets and cockerels.

When you have multiple roosters, they will compete for the same hen, either with each other, or by mating with the hen successively.

The reason is simple: the top rooster gets to pass his genetic value on to the hens, who in turn hatch his offspring.

This can particularly be a problem if you have several roosters and not enough hens for each. At times, we’ve raised heritage breed chickens for meat, meaning we’ve had more roosters than hens.

We eventually had to separate the hens from the meat chickens because the girls were in a dangerous situation; too many roosters trying to mate with them at one, and successively.

Female chickens are usually compliant, leaving them vulnerable to eventual problems if they mate too much.

To make things even more interesting, there are also instances of hens taking the social role of roosters, including mating, in the absence of a male.

These situations are few and far between, but it does happen.

Chickens mate several times a day, perhaps more if there’s a lot of roosters. By their nature, roosters are competitive, and will compete for the “top rooster” crown.

If left to their own devices, they’ll also almost continuously mate to establish their social dominance.

Some things to look out for when chickens mate

There’s a few things you should be aware of when it comes to chickens mating. Make sure your hens aren’t overly bothered.

You’ll know there’s a problem if they’re excessively missing feathers, or if there’s broken feathers on their back. That’s an indication they’re mating so much that the roosters are damaging their body.

Also check your hens for wounds. We had a hen who was sweet and compliant, but one day we noticed she had deep wounds on her side.
She never complained, but they were so deep that our only alternative was to euthanize her.

We had added a new rooster who was so aggressive with establishing his dominance over our top rooster that he tore large holes in our hens’ sides. (Here are some tips on adding a new rooster to your flock).

Also check your hens’ heads to make sure there’s no sores. The roosters will often grab hold of the back of a hen’s head right where the comb meets the head. Sometimes, that area can get picked raw.

If you have multiple roosters mating with your hens, then it might become necessary to separate them.

When chickens mate, the rooster stands on the female’s back, and if a lot of roosters fight over one of your girls, then her back can get hurt.

The bottom line is that it’s natural for chickens to mate, but as their owner, you should make sure everyone is safe.

Have you ever wondered “How do chickens mate?” Did you learn anything new about the “whys” of chickens mating? Leave a comment below!

A frequent question I get is “Can chickens eat suet cakes?,” and not only is the answer a definitive “YES!” but feeding homemade DIY suet cakes to chickens can help reduce bad behavior and stress from being confined in a coop all day.

Don’t let making homemade suet cakes become something overwhelming for you! I put together an awesome cookbook for you full of healthy recipes. Cluck Cakes has 11 recipes for organic and natural treats you can make for your hens. 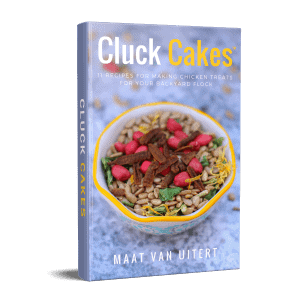 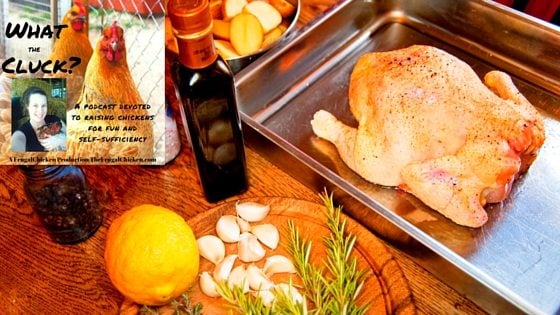 A lot of people are afraid to start homesteading because they’re concerned about the costs, or how to make money homesteading.   In today’s episode of What The Cluck?!, I talk to Roe Harris of Harris Homestead – Sumterville, FL.  Roe has run a successful meat chicken business from her homestead in Florida for the past… 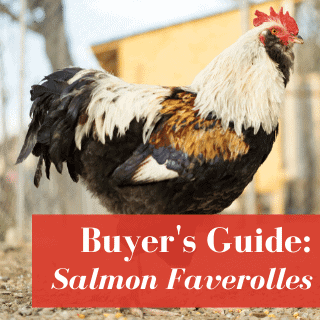 Salmon Faverolles chickens are stunningly cute – just as much in body as in personality. Friendly, cuddly, and fluffy, they are great with children, too.    Faverolles chickens come in a wide color palette, from Mahogany, Black, Buff, Blue, Blue Salmon, Cuckoo, Ermine, Laced Blue, to Splash. But only two colors are actually recognized by… 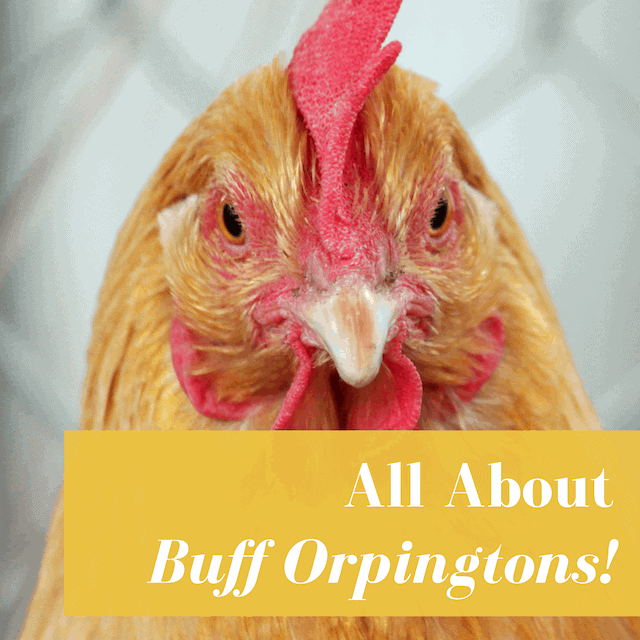 Buff Orpington chickens are one of the most popular breeds out there – and it’s because they’re nearly the perfect chicken!   Originating in the United Kingdom, Orpingtons are a heritage breed that’s well loved because of its calm nature, beautiful feathers, and functional purposes.   If you’re thinking of adding one to your flock,…

I’ve gotten a lot of questions lately about which breeds are best for a backyard flock for the first time owner.   First, congrats on making the leap into chicken ownership! Watching your birds scratch and interact with each other is one of the most relaxing past times I can think of.   They’re great… 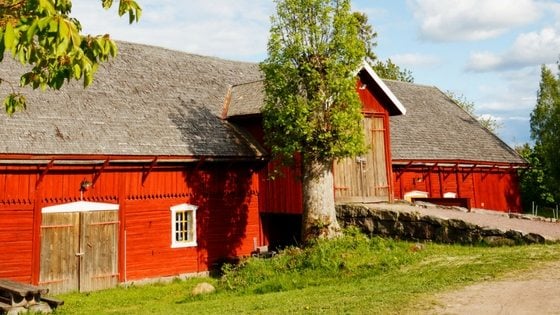 Bug season is upon us….and when you have as many animals as we do, you have a LOT of flies!   I used to buy store-bought bug sprays, but after many years working at the FDA, I know what’s in them…and there’s natural options I prefer to use, especially on my kids.   (A lot… 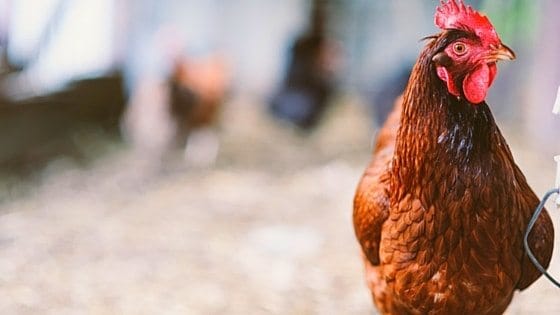 With it getting hotter, I wanted to show you a DIY automatic chicken waterer we made right on the homestead.   It cost us under $5 to make, but it solves so many problems on the farm. The last thing we want is for our animals to be thirsty or get heat stroke, and this DIY automatic…