We finally had a chillier than normal (read: in the 60s F), which tells me that soon, the dang mosquitoes will go back in hiding for another 6 months.

I started putting the finishing touches on the duckling coop (they’re WAY happier to be out of that tractor and near a big pool of water for splashing), and in the video, all you see is Larry and I swatting at mosquitoes, LOL!

The video of what we have so far is almost complete – hopefully, it gives you some inspiration. The building, that is – not the mosquito swatting.

We’ve completed most of the repairs on the main run and the duckling run – which means roofs are next!

The duckling run has a high fence, and the wire extends about 1 foot into the floor of the pen to deter predators, so I don’t need to worry about a full roof for them – just a secure shelter where they can sleep and stay safe.

Up next is the shelter – for now, they’ll come into the coop at night, but very soon (meaning, after I buy some 2x4s, lol) there will be a run in for them.

When they’re full grown, we can easily expand the run to accommodate them.

I’m dying to see what their final feathers will look like – the tail feathers are just starting to peek through. I think we might have a couple that feather out black.

Won’t that be fun? 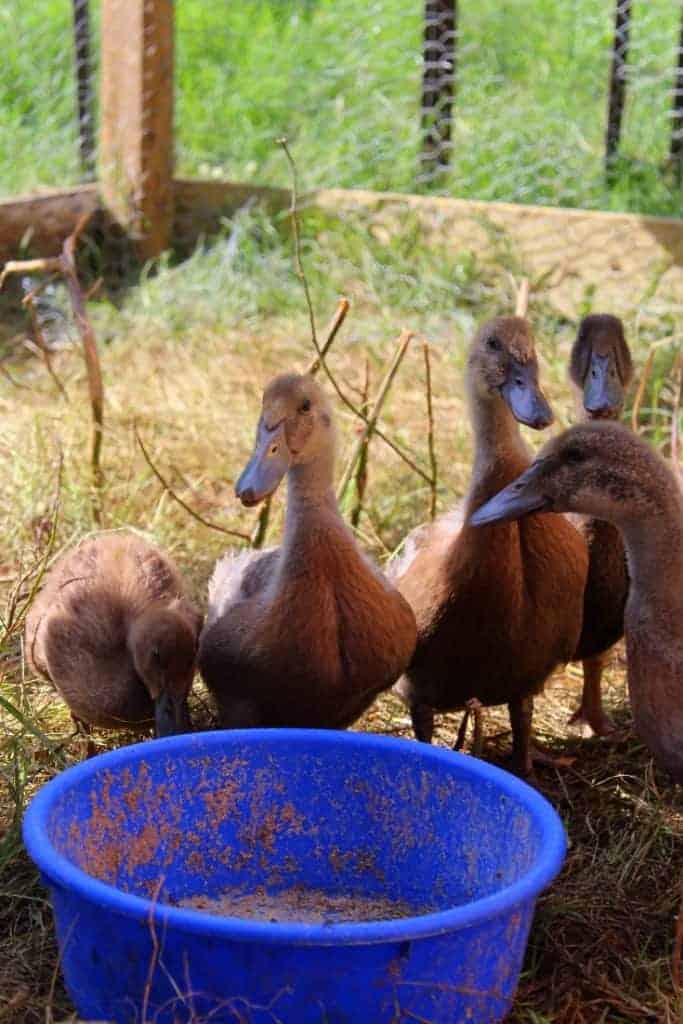 The chicken run definitely needs a roof. The fence is 8 feet high, but the hens can fly 8 feet. And get mauled by roosters, dogs, or whatever critter is passing by.

So, I’ll be getting some simple trusses, then adding chicken wire on the top. Part of it will be open to the sun and part will have a solid roof so they can get out of the rain and sun.

I’m pretty sure we have predators still running around – I think my next product review will be those predator lights.

Speaking of predators, for 2 days, one of my chicks went missing.

They’re in the coop full time because they’re too big for any of the tractors and too small to free range while we redo the run (yes, for the 3rd time – Dahlia the goat got loose and rubbed against the wire, pretty much tearing it to shreds).

I looked and looked – and by looked, I mean I searched every nook and cranny of that coop. Then I realized the wire we have over one of the doors is loose.

I figured a skunk got him, but the next day I looked again, and he was STILL missing. So, I gave him up for lost.

Then yesterday evening, he reappeared in the coop – there’s no way he left then returned, because that loose wire was easy for a skunk to wiggle in and out of, but not so obvious for a chick to wiggle out and then BACK IN to the coop.

So, I have no idea where this chick was hiding, but clearly, he is far cleverer than I am! 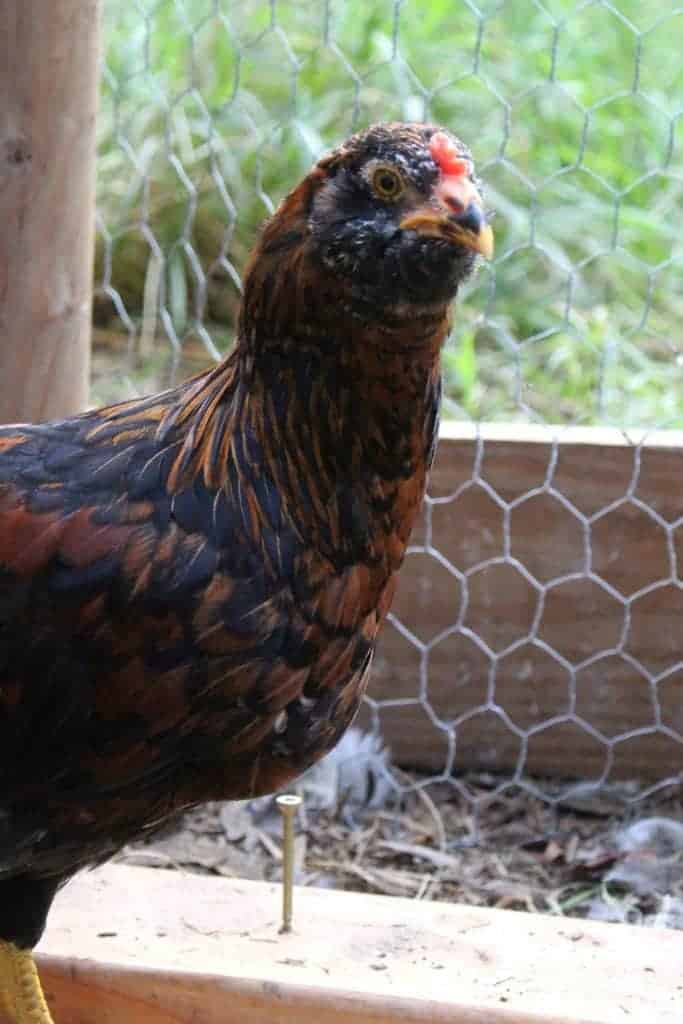 That’s it for this week! Hope you enjoyed these photos! 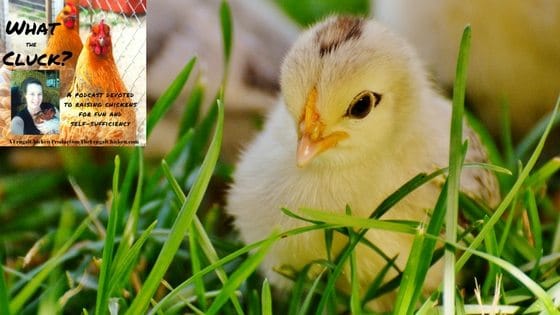 Baby chick season is almost here….and they have special needs adult chickens don’t.   We are definitely getting chicks this spring (despite what my husband says!), and right now we’re busy preparing for their arrival.   Baby chicks are a needy bunch, and it’s best to be prepared before they show up on your doorstep… 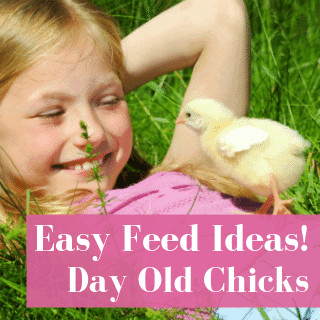 If we’re going to raise baby chicks from day-olds to layers, we may as well start at the beginning – with what to feed baby chicks.   In this video, we’ve got a new batch of little cuties that were just born! The problem is what to feed them from now until they’re ready for… 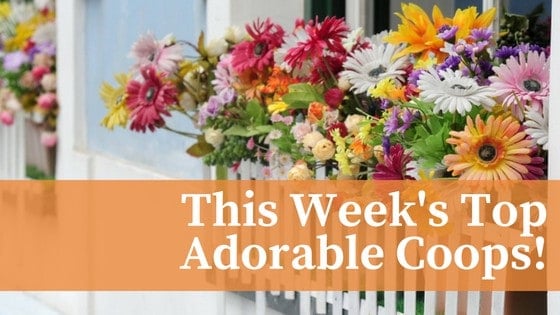 Ahhh….coop envy. We’ve all been there.   I’m not a very “crafty” person, so I love writing this blog post every week that has beautiful coops, designed by very talented chicken owners – coops that are destined to give you ideas to beautify your own coops or just inspire a bit of “coop envy.”  … 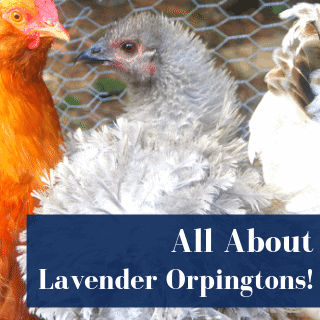 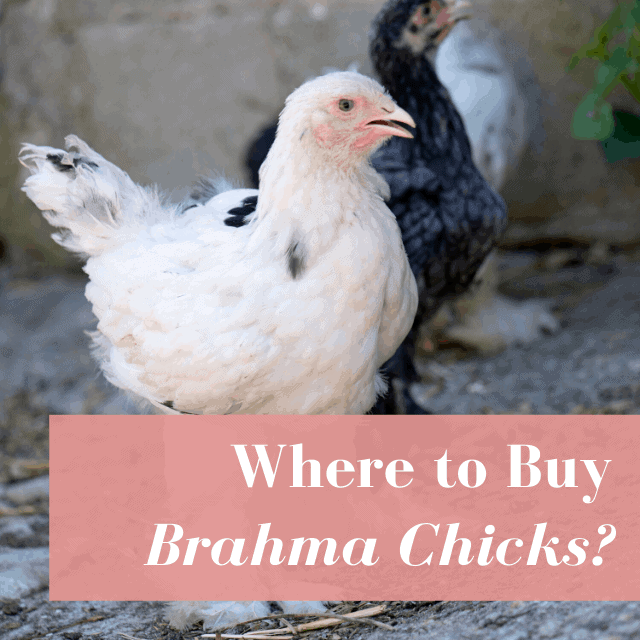 They’re big. They’re feather-footed. And they’re undeniably fancy.  Brahma chickens are fantastic dual-purpose birds you can raise on your farm. Although these chickens are some of the most popular meat birds, they can nonetheless be difficult to find in your local area.  Therefore, it’s important to find a reliable hatchery that will ship Brahma chicks…