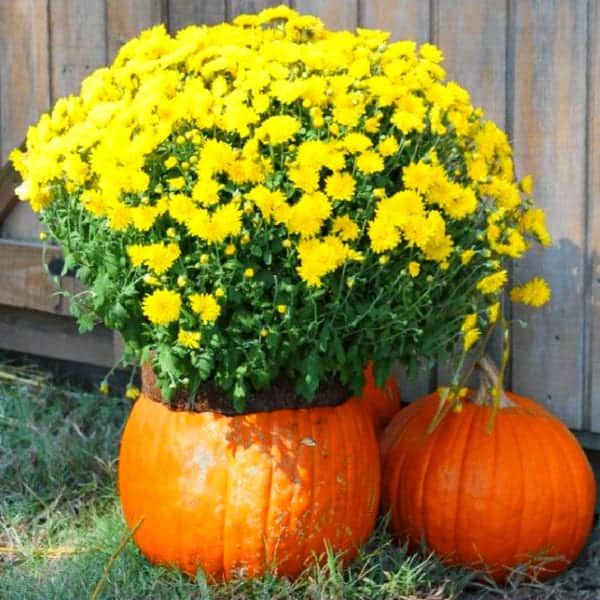 Fall is here, y’all. And that makes it a perfect time to decorate your chicken coop with a cute fall display of pumpkins and mums.

Why decorate your coop? Well, certainly you don’t HAVE to. But it looks kind of cool, and if you do it right, you can recycle your fall decorations as healthy treats for your chickens.

Posted by I Love Backyard Chickens on Friday, October 13, 2017

Here on the farm, I like things to multitask. And that includes decorations.

So that’s why I love making flower pots out of pumpkins. It looks good – and when you’re tired of the display, your hens can eat the pumpkins AND the mums.

(Wondering why pumpkin is so healthy for hens? Click here for more information.)

We’ve done the whole “a coop is just a coop” thing here on the farm, and while that’s fine, things just look better when they’ve been given a bit of color. It’ll cheer you up, and enhance your flock’s surroundings and give them some environmental stimulation.

So in this article, I’m going to show you how you can make a living flower pot out of a pumpkin and options for flowers that are edible for you and your flock.

So, this is pretty simple, and if you’ve ever make a jack o’ lantern, you can carve out the pumpkin without much instruction.

Something to note is in the video, I used a kitchen knife. Someone on Facebook pointed out a jigsaw would have been a better choice – and they’re right.

Avoid the mistake I made and use something electric. That being said, it didn’t take very long nor was it very hard to carve the pumpkin using a knife, so if that’s all you got, then it’ll still work great.

It goes without saying that you should use a pumpkin that’s big enough to house the flowers you plan to pot in it.

Step 2: Scoop out the insides

While this seems pretty obvious, I point it out because the pumpkin innards are GREAT chicken treats. (Find out why pumpkin is so healthy for chickens right here).

You’ll hear scuttlebutt that pumpkin seeds are natural dewormers. While there’s really no evidence that they’ll keep your flock parasite-free, they’re healthy for your flock.

So they might not do much for parasites, but they’ll DEFINITELY do something to help your flock be healthier – and happier, because hens love treats.

Feed the pumpkin and the seeds raw – don’t roast and definitely don’t salt the pumpkin seeds.

Step 3: Select flowers that are healthy for chickens

Chrysanthemums are the traditional fall flowers used in displays, and luckily, they’re healthy for chickens to peck at. Just be sure you source organically grown flowers, or at least those not exposed to pesticides.

Other options are calendula or even herbs that have started to flower. It’s up to you. For this project, I used chrysanthemums because they’re readily available.

Step 4: Stick the flowers in the pumpkin, and you’re done!

This isn’t a hard project, but it’s one you and your hens will both appreciate. Once you’re done with the display, as long as the pumpkin isn’t rotting or moldy, you can pass it on to your hens – who will love you for it! 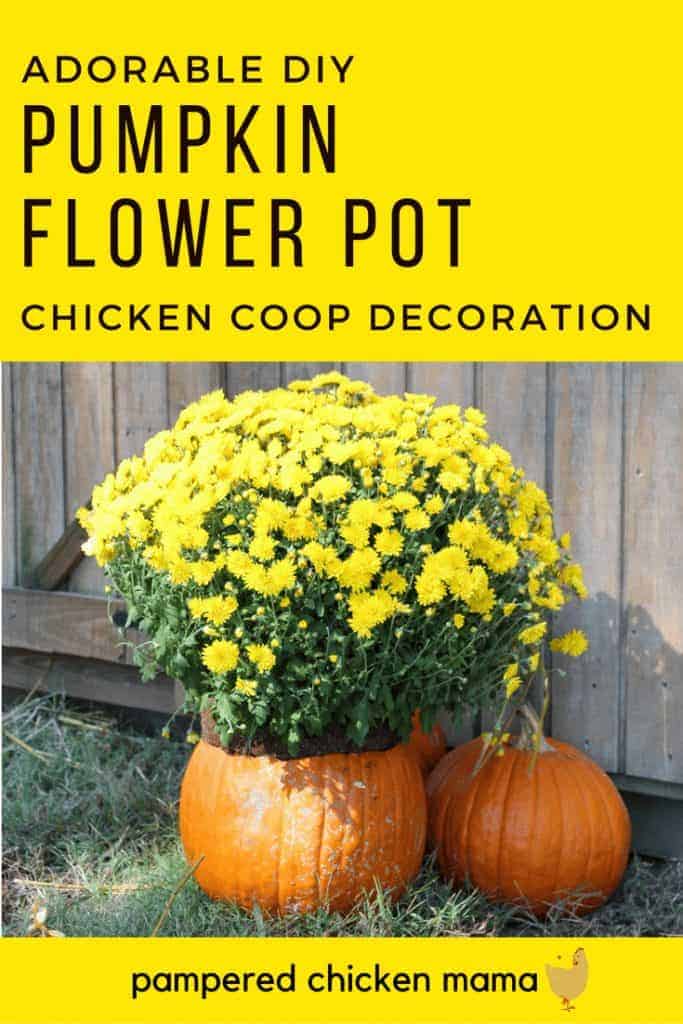 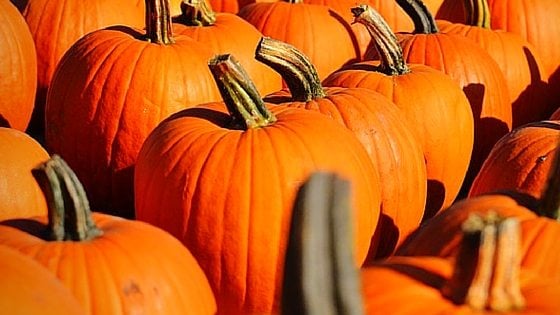 Now is the time of year that I get superpsyched – time to make pumpkin puree!

I get excited for the post-Halloween time not just because I can make pumpkin puree, but because those round orange squash become super cheap at the store – which means I can feed pumpkin to my chickens and pigs for a very low price.

But back to pumpkin puree (which you can feed to chickens too, by the way).

Pumpkin puree is really easy to make, and you won’t believe how much better it tastes than the stuff in the cans.

And of course, as homesteaders, we like buying items we can use in multiple ways, and pumpkin is no different. 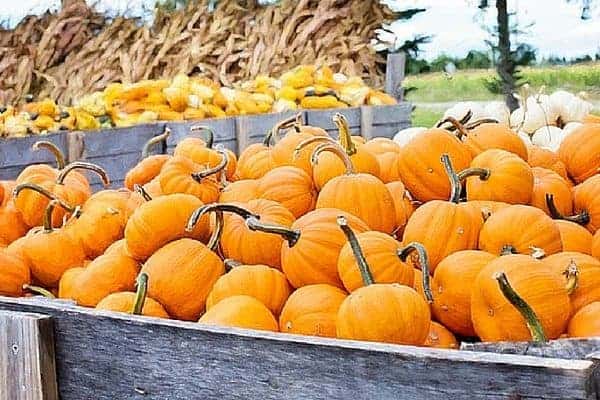 In addition to pumpkin puree, you’ll also have seeds for toasting and the remaining guts to feed your chickens.

This method for making pumpkin puree works also for other squashes, like Hubbard, you name it, so feel free to become a puree making fool this fall!

So, let’s look at how to make pumpkin puree for pies, soups, or whatever your imagination can think of! 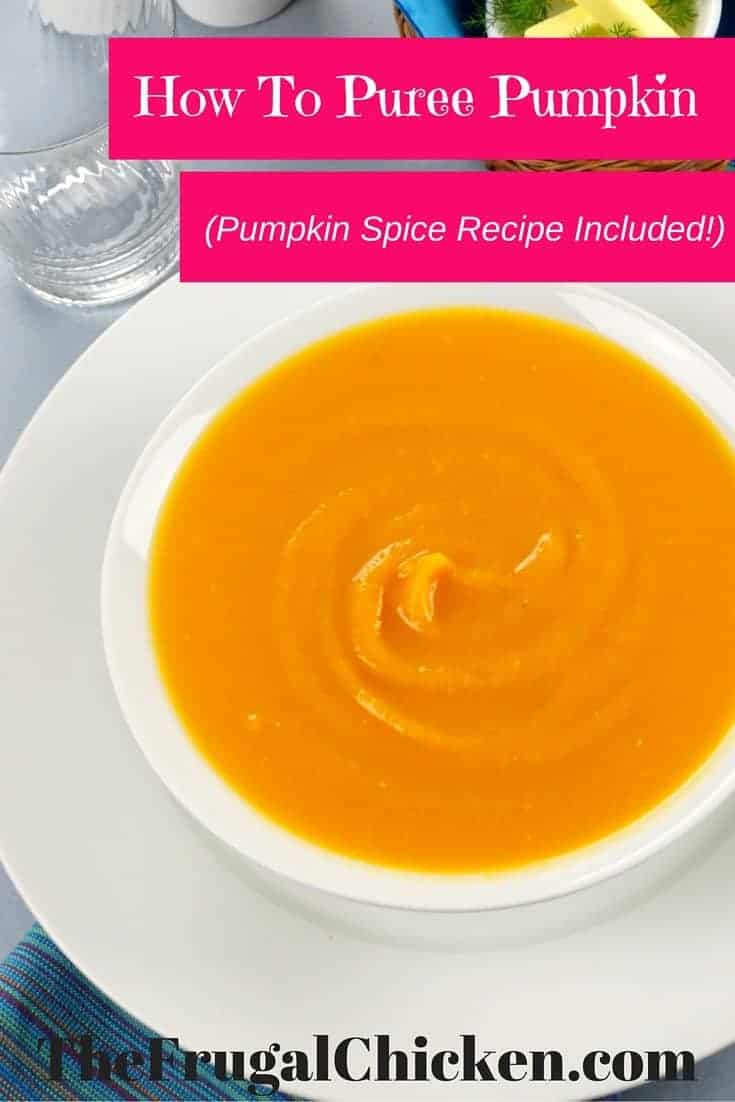 How to make pumpkin puree

For this recipe, we’ll just use sugar pumpkins (also called a pie pumpkins) – they’re the most commonly used for homemade pumpkin puree, and easily found at any market in the fall.

They’re called sugar pumpkins for a reason: They’re the best for baking and making pumpkin puree.

Typically, they’re 6-8 inches in diameter, which is an easy size to lift and cut up without getting too overwhelmed, and you can expect about 16 oz of pumpkin puree.

Preheat your oven to 350 degrees (as you know, food should not ever be put in a cold oven or on a cold pan if you plan to roast, so pre-heating is a very important step.) 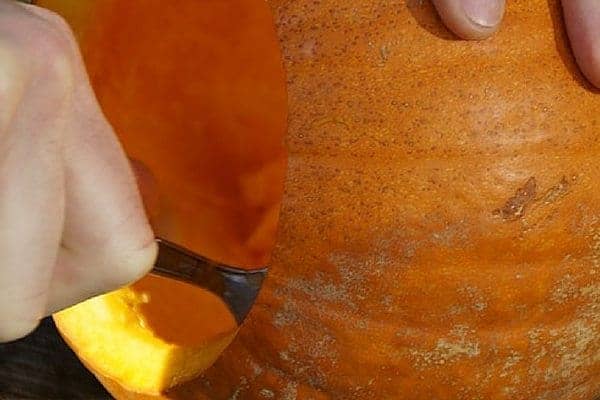 Remove the guts of the pumpkin, set aside to remove the seeds for roasting later.

Slice up your pumpkin into 1 inch size pieces. 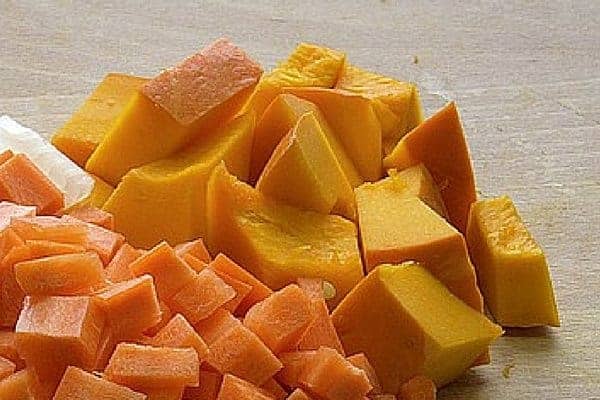 Place in a roasting pan that already has 1/2″ of water in it. The water is necessary to keep the pumpkin from burning.

Cook until done, which should be about 45 minutes. Pierce the pumpkin with a fork or knife to check if it’s done – if it slides right off, it’s ready!

Remove the pumpkin from the oven, and allow to cool.

Once the pumpkin is cool, scoop the flesh away from the peel. (The pumpkin peel should be relatively soft, so feel free to give it to your animals, or compost).

Blend the remaining flesh in your blender until a puree is formed. 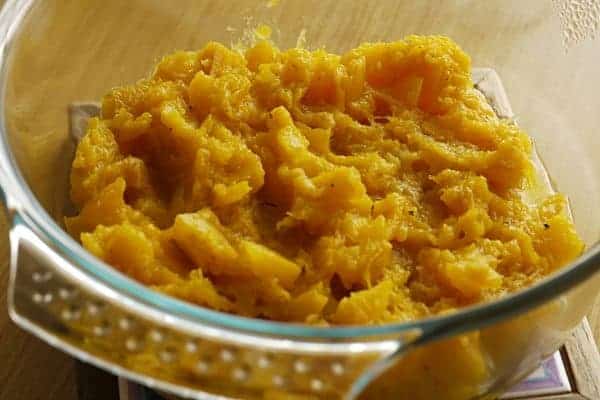 You can use the puree right away in your favorite recipe, or store in the fridge for 2 days.

If you’re not going to use your puree right away, store it in the freezer.

You can also freeze enough pumpkin puree to last the year – just make sure to hit the sales after Halloween to grab pumpkin at a cheap price.

Now that we’ve made pumpkin puree…

Making your own pumpkin pie spice is as simple as…well…making pumpkin puree. 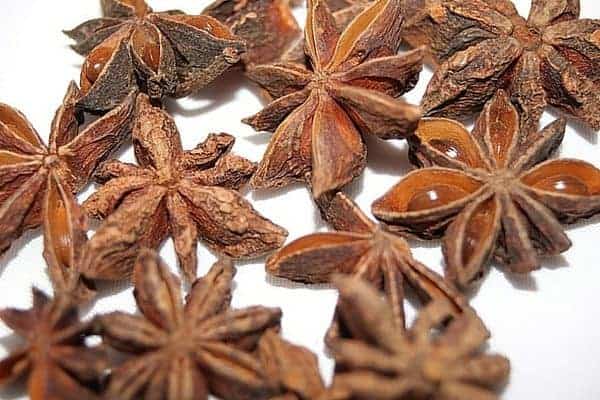 Grab the following (if you’re not sure where to buy fresh spices, we’ll talk about that in a minute):

Combine in a mason jar to store, or just immediately with any recipe using your pumpkin puree.

Now that wasn’t hard, was it?

Okay, as promised, here’s where to buy your fresh spices:

How do you think you’ll use pumpkin puree this season? How about the spice? Contact me at [email protected] or comment below!