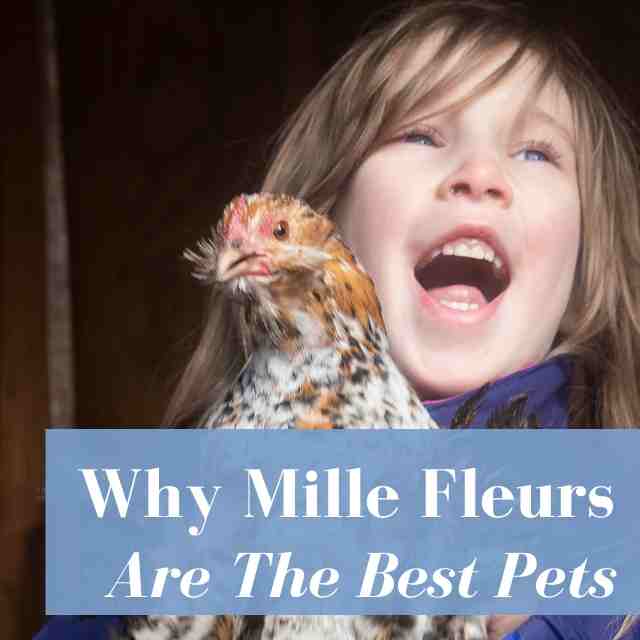 Why Mille Fleur d’Uccle Chickens Are The Best Pets

Thought about adding Mille Fleur d’Uccle chickens to your flock? Not sure if they’re right for you? Read on, and discover this wonderful breed!

The Mille Fleur d’Uccle is a small bantam whose heart is massive. It is a chicken who loves affection – and reciprocates. Their speckled feathering is lovely, and captivates all who look upon them. Unlike other breeds, people buy Mille Fleurs as pets. They’re very quiet and love cuddles. They’re the perfect size for small children. If you add them to your flock, they’ll bring great big smiles to your family!

What Does “Mille Fleur d’Uccle” Mean?

The breed originated in Belgium, and the name “Mille Fleur d’Uccle” has French origins. Mille means “thousand”. Fleur means “flowers”/ De and the contractive form d’ mean “of/from”. Uccle is a region of Brussels where this breed originated. So, the chicken’s name translates to Million Flowers from Uccle. How adorable!

Where Do Mille Fleur d’Uccle Chickens Come From?

These birds have quite the origin story! In the late 1800s, a Dutch businessman living in Belgium, Michael Van Gelder, set out to create the greatest chicken breed. By 1905, he’d reached his goal when he premiered his new breed at a chicken show – the Mille Fleur d’Uccle bantam. Soon, it’s popularity spread over the continent and into the UK. The USA followed soon after. The American Poultry Association added the breed to the Standard of Perfection in 1914.

They’re adorable! Mille Fleurs live up to their names – their red feathers are tipped with white and black. It looks like they’re covered in a thousand little flowers! They have a muff and beard which extends all around the head. They have feathered shanks, and the feathering can be quite impressive! Female Mille Fleur d’Uccle have very small or non-existent wattles. Both males and females have a single comb.
Hens and roosters are about 1 – 2 pounds. They’re a true bantam chicken and their small size very much reflects this. There is no standard size for this breed. Because they’re so tiny, they’re more susceptible to predators (especially rats). Keep this in mind when choosing a coop for them!
If you read my article about how chickens mate, you might plan to coop your hens with other breeds. Remember, these hens can’t have large roosters mating with them. They’ll get squashed!
These birds do well in cold weather. But because they’re small, you should shelter them from extremely cold temperatures. Keep them in a warm coop that’s are not drafty. In the summer, be sure to keep them in the shade as much as possible.

So much cheek in this rooster's expression. . Who here has Mille Fleur bantams?

This breed is perfect for any flock. Owners everywhere love these birds for their remarkably docile temperaments. The hens are very quiet. They’re fantastic around children, and will allow your child to hold them. They do well in small chicken coops, and are great for urban flocks. The hens aren’t very broody.
They don’t fly often, if their coop is welcoming. But if necessary, they’re great fliers. Larger birds have too much mass for their wings to carry them. Bantams have a leaner body that’s more suited to flight than many birds. But you won’t have to clip their wings – they tend to be homebodies. They sometimes roost in higher locations, but usually just a few feet off the ground. You might find your hens prefer roosting on swings!

Are There Any Other Varieties?

Technically, no. The Mille Fleur is a type of d’Uccle bantam. If you flip through a hatchery catalog, you’ll notice their cousins:
The Porcelain d’Uccles are popular as well.

Are They Good Egg Layers?

Mille Fleurs are fair layers, mostly kept for ornamental reasons, and not for egg production. Hens lay about 160 small cream-colored eggs per year. Provide a safe nesting area, and you can expect your hen to lay consistently when she’s old enough. Your pullets will start laying when they’re about 6 months old.

Because of their leg feathers, they are slightly more at risk for mites than other chickens. You should take steps to protect your flock from mites.

Bringing a Mille Fleur d’Uccle into your family is a great idea! They have fun personalities, and you’ll fall in love! (Not sure what to feed a bantam to keep them healthy? Read this article next!) 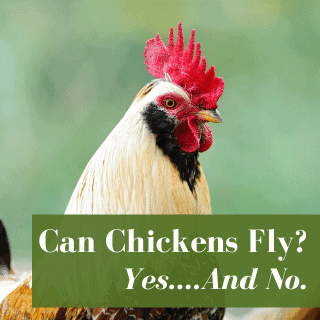 Can Chickens Fly? Yes….And No.

Wondering “can chickens fly?” Well, like most things with chickens: it depends.

Some chicken breeds can fly and some can’t. And even within a specific breed, some individual chickens can fly, and some cannot.

In this article, we’ll take a deeper look at the question “can chickens fly!”

What Is A Flightless Bird, Really?

These massive runners live in Africa, and use their 2-inch diameter eyes to spy out threats like lions, leopards, and packs of hyenas. While it might not be clear when these incredible birds lost their ability to fly, there is evolutionary precedent for this: ostriches are ratite, which is “any bird whose sternum (breastbone) is smooth, or raftlike, because it lacks a keel to which flight muscles could be anchored. All species of ratites are thus unable to fly.” Other ratites are the emu, cassowary, rhea, and kiwi.

Right up there with the ostrich as the most iconic of flightless birds is the tuxedo-sporting critter: the penguin. Unlike ostriches, penguins are not ratites. They possess the keel on their sternum to which their wings attach.

Whereas volant birds use their wings for flight, penguins have adapted to underwater explorations, and instead use their wings as fins that allow them to effectively navigate in the waters where their food lives. In a way, because of this adaptation, penguins might be considered volant birds that just happen to fly through a vastly different environment than most other volant birds.

So where does this leave us with pet chickens?

So, what does all this say about chickens? Your chickens have all of the right tools for flight. They (generally) have the feathers and the keel on their sternum which their wings attach to, and they certainly have the muscles for it. With all of these details, the question remains: Can chickens fly?

Yes, kind of. And it depends on the breed.

All chickens have strong muscles, and flight is one of the few ways this species can keep safe from predators. Most breeds are capable of “burst flights”, which are quick and can carry chickens to safety within moments. At night, as you probably know, they like to fly up to their roosts, which gives them a good vantage point to see if any raccoons, dogs, etc are coming their way.

Since they’ve been domesticated, they’ve largely lost this ability. Why is that?

Chickens are most commonly bred for two things: eggs and meat. White meat is muscle, and it’s white meat that our ancestors favored. Selective breeding for meat has maximized the size of our chickens’ chest muscles. In theory, this should make chickens fantastic fliers. In reality, however, this is counterproductive. In order to fly, birds need light bodies with muscles strong enough to carry their own weight.

The ideal flier will have a lean – almost sinewy – body: one that is strong enough to propel itself off the ground and light enough to stay aloft. Sustained flight also requires endurance. Human-bred chickens seldom are bred for strength, leanness, and endurance.

Unlike ostriches and penguins, modern flightless chickens are not tied to the Earth because they don’t have the muscles to fly, but because it’s been bred out of them. In other words: We have bred our birds to be too large to support much of a flying ability. The average chicken can fly for about 10 feet, and about as high off the ground.

Being similar in flight skills to game birds, chickens were never the greatest fliers, and lack the skills for sustained flight, but they have been known to fly for as long as 13 seconds and a distance of 301.5 feet. It might be a short flight, but it likely is plenty enough to do its job: to get the chickens away from danger.

Which Chickens Can Fly?

Larger chicken breeds are far less likely to even hover, as the energy required for even minimal flight can be preventative, but there are a number of breeds that are more inclined to flight:

are the most commonly known fliers.

They have leaner bodies, and this is better suited for the short flights attainable by chickens. Our own Leghorns love flying into trees.

At night, Araucanas occasionally roost up in the trees. Originally from Switzerland, the Spitzhaubens are a flighty bird that sometimes takes that adjective literally. Thanks to their smaller size, some bantam hens can achieve high heights for roosting purposes or when spooked.

There are some breeds that, no matter what, simply won’t get liftoff. Either they lack the feathers, or are just too dang heavy.

Some breeds, such as Silkies, can’t fly at all – they simply don’t have flight feathers on their wings. To keep them safe, you have to give them a place to climb up to. Ours can get lift off of maybe 12 inches, and that’s pretty much a big jump for a silkie.

Our Mille Fleur bantams and Cochin bantams can’t fly either – although they have wing feathers, their wings are too small.

Other chickens, such as Orpingtons or Brahmas, have been bred to be so large, they simply are too heavy to fly.

How Can I Stop My Chickens from Flying?

A few times a week, a person in my Facebook group asks how they can stop their flock from pooping all over the neighbor’s yard. There’s some easy ways to keep your chickens from making unwanted visits.

For the heaviest breeds, you will not need anything taller than a 4-foot fence. For the slightly less heavy – the Mediterranean breeds, for example – you might need to build a 12-foot fence.

If you want to stop a bird from flying, one more adage comes to mind: “clip their wings,” which really means to trim their feathers.

When done correctly, trimming feathers is painless. Once clipped, your chicken’s feathers can’t provide the lift needed for flight.

Do you still wonder “can chickens fly?” How far have your own chickens flown? Leave a comment below!