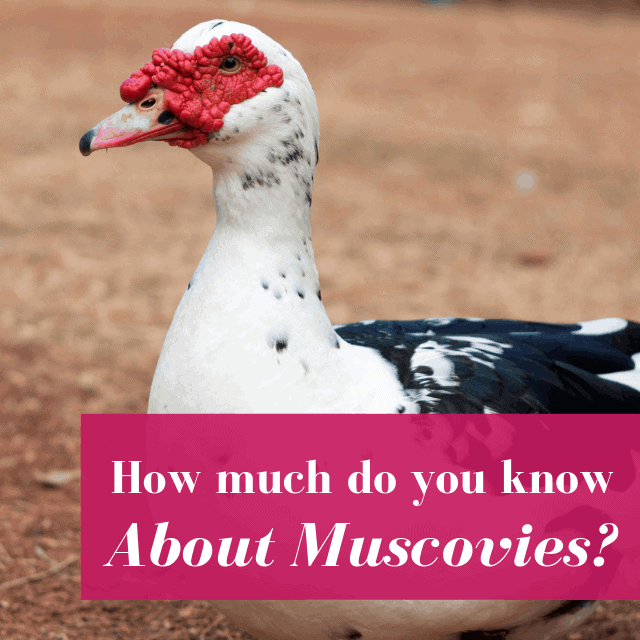 So you’re considering raising a domestic Muscovy duck? Well, you’re a smart cookie because they make great pets! And you get eggs!

This breed of duck, with its red face and friendly personality, is a great addition to any flock. You’ll get white eggs and get to watch them hatch ducklings. You’ll also get to enjoy seeing them gobble goodies from water, and generally love life!

In this article, you’ll learn all about Muscovies, how to care for them, what raising Muscovy ducks is like, and what makes them unique!

Yes! Raised correctly and when used to human company, Muscovies can make great pets. They’re easy to care for, don’t require much beyond food, water, a dry, safe home, and adequate space. They’re pretty inexpensive, especially if you grow your own food for them. In return, you’ll get eggs!

However, just remember that some ducks (and this isn’t particular to Muscovies) don’t like cuddling. Muscovies have sharp claws, which are necessary to defend themselves in the wild, so if your duck doesn’t want to be picked up, he or she might scratch you.

You can buy Muscovy ducks at most major hatcheries.

Muscovies have similar bodies to most ducks, however, they are very distinctive looking. They have red faces with a raised, fleshy area called a “caruncle,” particularly the males (called drakes).

What Are Muscovy Ducks Used For?

Most people these days keep Muscovy ducks for their eggs and companionship, but traditionally, they’ve been kept for meat as well. This breed lays about 120 eggs per year, and is said to have the highest meat yield of any duck.

Any part of owning ducks includes getting eggs! It’s one of the best parts of owning any type of domestic fowl. Here’s everything you need to know about Muscovy ducks and their eggs!

Muscovies are fair egg layers, and you can expect about 120 white eggs per year. It’s important to remember that unlike chickens, ducks don’t lay in nesting boxes – so you’ll have to provide a nice environment that’ll prompt them to lay eggs. You’ll also have to provide a good diet so your hens have enough protein and energy to give you eggs.

At What Age Do Muscovy Ducks Lay Eggs?

You can expect your Muscovy hens to start laying eggs at about 28 weeks (approximately 6 months). This depends on a few factors, including diet, season (ducks don’t really lay eggs in winter), and environment (high stress levels can stop egg production). The mating season of the Muscovy can last from August to May.

You can learn about why domestic fowl stop laying eggs here (and what to do about it).

Most ducks stop laying at about 3 years of age, although that will depend on the individual bird. A good diet full of protein will help your Muscovies lay eggs for a long time.

Do Muscovy Ducks Move Their Eggs?

When sitting on a nest, ducks don’t generally move their eggs. If a predator attacks the nest or chases off the hen, the mother will likely move on and lay enough eggs for a different clutch.

No, ducks typically stop laying eggs in the winter, when they need to conserve energy to stay warm.

Yes, if raised to enjoy human company, Like most waterfowl, they’ve evolved to fend for themselves in the wild. So, if you don’t spend time with your Muscovies, you might not be able to enjoy them as much. In general, Muscovy ducks are curious, intelligent, and social birds. However, they might not like to be cuddled or pet very much.

Not usually. During most of the year, they’re friendly and enjoy human company (especially if it involves treats.) You might notice that they come up to you the instant they see you!

However, if a hen is on her nest, she might hiss to protect herself. Since she can’t move (she needs to keep incubating her eggs), it’s her only defense.

Similarly, the drakes can be protective and territorial of mates and and their ducklings. It’s only natural!

During these times, it’s best to keep your distance and know your ducks are being good parents. If you don’t want to deal with this, then remove the eggs from their housing area each day to discourage nesting.

You should also know that like most male ducks, the drakes can be very aggressive towards the females during mating season (even if they’re not aggressive towards humans). This can cause the hens to have health issues from trampling or they might even be crushed.

The best Muscovy drake to hen ratio is 10 hens for every 1 drake. However, you might opt to only raise female Muscovies.

As a general rule, no. They’re friendly birds who enjoy human company. However, like any animal that is provoked or threatened, your duck might claw or bite you to protect themselves. It’s always best to treat your ducks gently.

No, Muscovies don’t quack! (Which makes them quieter than other ducks, who are generally vocal and love to let you know when things aren’t perfect). Unlike other duck breeds, Muscovies aren’t descended from mallards, and so have a uniqueness all their own. Muscovy duck communication includes a type of hiss that sounds similar to a goose hiss.

Why Do Muscovy Ducks Hiss?

Muscovies hiss because they don’t quack – the hiss is their way of quacking. Muscovies aren’t descended from mallards, and so never developed the need to quack. Only the males hiss, however. You also might notice more hissing during mating season – this is the males defending their territory and their mates.

How To Raise Muscovy Ducks

To successfully raise Muscovies, you’ll need to think about:

Let’s look at each of these.

What Can Muscovy Ducks Eat?

Like most ducks, Muscovies love to forage for goodies in the grass. However, this isn’t enough – you should also offer a high-quality duck feed to make sure you still get eggs. Without it, you might not get as many eggs and your ducks might not be as healthy. Muscovies are omnivorous, and will enjoy hunting for bugs as much as they love bananas.

Wondering “what do Muscovy ducks eat that they REALLY love?”

In particular, Muscovies love MOSQUITOES. Which is a boon to anyone living in the South. (We all know how bad mosquitoes can get).

You can discover a great layer feed here. If you want to grow food for your Muscovies, you can learn how to grow leafy greens for ducks here.

Like most ducks, they love searching for goodies in water, dipping their bills into even the most muddy pond water to see what they can snag.

You should also be aware of what duck’s SHOULDN’T eat. Avoid:

If you’re wondering how to call a Muscovy duck, simply shake a bag of treats, and they’ll come running!

When they’re tiny, Muscovy ducklings have different feed concerns. You’ll want to raise them on a 16% duckling starter – a feed that’s specifically formulated for baby ducks.

Baby ducks need more niacin than chicks, so it’s critical to provide the right feed so your ducklings grow correctly. Without it, you might notice their bills and bones not developing right.

If you can’t buy duckling feed, you can mix brewer’s yeast with chick starter. You can discover how to raise ducklings here and get a full list of what Muscovy ducklings eat here.

If you want to hatch duck eggs, you can discover the best incubators here.

How Do You Tell The Difference Between Male And Female Muscovy Ducks?

Male ducks will be much larger than the females, with more pronounced caruncling than females. They’ll also have their thicker legs and bigger feet. You’ll also easily be able to tell the males from females at mating time!

Like all ducks, your housing for Muscovy ducks means a shelter to keep them safe. It should keep predators out (learn how to build a predator proof coop here) and keep them out of the elements.

Since Muscovy ducks do perch (unlike other duck breeds), you’ll need to provide a roosting area. It’s best to make the perches fairly wide to accommodate your flock’s large feet.

You can learn what a coop should include here.

How Much Space Do Muscovy Ducks Need?

You should provide 10 to 15 square feet of space per duck. Without it, your ducks might start to feel stress, stop laying eggs, and develop bad habits (like feather picking, bullying, or fighting). Having enough space also keeps their living area cleaner and easier to keep clean.

Yes – plenty of people raise Muscovies in cold areas. Just be sure to provide a warm, safe home for them to live in.

How Long Do Muscovy Ducks Live?

The Muscovy duck lifespan average will range between 5 to 12 years. This depends on a lot of factors, including diet, shelter, and their environment. You can learn more about how long ducks live here (and how to increase their lifespan) and about how to raise healthy ducks here.

It’s always a good idea to provide a pool full of cool, inviting water to your ducks! While Muscovies aren’t as water resistant as other ducks, they still enjoy digging for treats and spending time in their pools. You can use a kiddie pool or build a pond for your flock. You will also want to provide a separate drinking area, where you can be sure your flock can access clean water. You can read about recommended waterers here and learn how to build a DIY automatic waterer for $12 here.

Yes, they can swim, although they’re less likely to take a turn in the pool than other ducks. This is because they don’t have efficient oil glands like other duck breeds. However, because of the shape of their bills, it’s easier for Muscovies to eat food that’s in water, so you’ll likely often see your Muscovy ducks in water.

Can You Eat A Muscovy Duck?

Yes, Muscovies have been kept for centuries because of their meat. Some owners say that these ducks have delicious lean, tender meat. They have larger breasts than common ducks and the meat is less fatty.

Yes, Muscovy ducks can fly (unlike most domestic breeds). However, they’re unlikely to fly away, especially if you offer plenty of treats.

Do All Muscovy Ducks Have Red Faces?

The Muscovy duck has one of the most obvious characteristics that can differentiate them from others- which is their red facial skin. This red skin can be quite bumpy, exaggerated, and with a knob on top of the bill and lumps all over.

Why Do Muscovy Ducks Have Red Faces?

Muscovy ducks have caruncles that are the red fleshy parts around their face,  also called a face mask. These caruncles help Muscovies keep their feathers clean when they come in contact with mud.

Do Muscovy Ducks Mate For Life?

No, typically they don’t. In fact, if no Muscovy drakes are available, the hens will mate with males from other duck breeds. However, their ducklings will be sterile and unable to produce further offspring.

What do you think? Are Muscovy ducks for you? Leave a comment below!

Article Name
Do Muscovy Ducks Make Great Pets?
Description
Want a domestic Muscovy duck? Will they make great pets for you? Here's everything you need to know, from egg color to personalities.
Author
Maat van Uitert