Have you ever wondered what the difference is between a raven and a crow? To be honest, the thought never even crossed my mind until recently. I simply called all big, black birds crows. These two birds look similar and share many common characteristics.

But, what sets them apart? Let’s explore the differences between these two mysterious black birds: Raven VS Crow!

The first thing to understand is that ravens and crows are both members of the Corvidae family – commonly referred to as corvids. This family also consists of other birds such as jays, magpies, nutcrackers, and more. While crows and ravens are closely related, they have a few distinct traits that make them unique.

Ravens are much less common than the common crow (which is probably why crows are more familiar to my brain). In this article we are talking primarily about common ravens and American crows (also called common crows).

One of the most obvious differences between ravens and crows is their size. Ravens are larger in size than crows with a wingspan up to 4 feet – often compared to the size of red-tailed hawks. They also have thicker bills (or beak) and wedge-shaped tails. In order to compare their tails, you really need to look at their tail feathers when they are in flight.

Crows, on the other hand…uh hum…on the other wing…are smaller in size than ravens, their wings are only about 17 inches long. They also more square or fan-shaped tails.

Ravens tend to have shaggier throat feathers than that of a crow as well. In fact, they generally just have a more shaggy look.

Both the raven and the crow have iridescent greens, blues, and purples throughout their plumage. Male and female ravens and crows resemble each other greatly.

Raven VS Crow Calls and Sounds

Ravens make a deep croaking sound, high-pitched sounds of alarm, and a low raspy sound. The raven calls can be heard for over a mile.

Crows make a variety of calls, including a cawing sound and a high-pitched chirping sound. They have more than 20 crow calls which is impressive. The most common is the stereotypical caw we all know and love…or hate. Their caws can be all different lengths and pitches, and all the variations have different meanings.

Ravens are quite intelligent and have been known to interact with humans in a variety of ways. They can even learn to problem-solve and mimic human speech. Watch this amazing video of one of the cutest ravens you ever did see.

Before you get to cheering for ravens in the battle of the birds, you should know that crows are also known to be quite intelligent and interact with humans in a similar fashion to ravens. They can also mimic human speech. Weird thought. It’s quite amazing.

The raven’s intelligence is pretty much matched by the intelligence of crows. The battle of the birds is truly a neck and neck race. Here’s a famous crow that will wow your wonder.

Behavioral differences between Ravens and Crows

Ravens are solitary birds and do not usually gather in large flocks as often as crows do. They are also known to be more curious and can often be seen exploring their environment.

Ravens are said to be more aggressive than crows. Ravens will attack and prey on other birds, while crows tend to avoid confrontations. However, if they are protecting their young they aren’t immune from dive bombing the threat (human or otherwise).

Habitat differences between Ravens and Crows

Ravens are found in grasslands, forest, and mountains while crows are often seen in urban settings.

Ravens can tolerate up to -58 F degrees! These hardy Northerners just earned a point in my book.

But again, crows hold their own in cold weather. Take a look at this defense mechanism. So cool.

Crows can go into a state called torpor. They lie on the ground with their bills half-open when sunning themselves. This is actually a state of unconsciousness where their core temperature drops approximately 10-12 degrees. This causes the breathing and heart rate to drop and the bird’s body then needs less energy to maintain body temperature.

Can you tell the difference between a raven and a crow now? It might be a challenge since they are so much alike.

Just remember the biggest differences are in their body size and beak shape. Watch the two video’s I included above and it will help. Heck, you might even want one of them as a pet bird after watching.

If it peaks your pet bird interest, but you aren’t quite ready for such a wild ride, then you might consider quail. They are adorable and easy to care for. They may not talk, but they are full of spunk and personality. If you want a talking bird, that is a beginner bird, check out parakeets!

You can also read about some pretty special chicken breeds that make great pet birds too, click here. 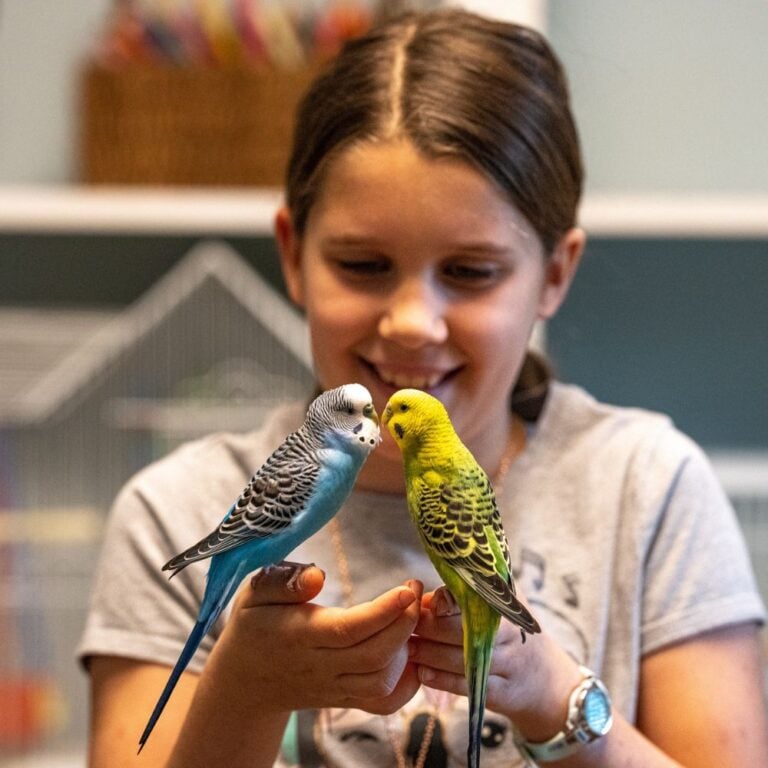 Did you know that parakeets, also known as budgies, are the smallest of the parrot family? And yes, that includes the ability to talk! Cheerful, chirpy, cute, and all-around a pretty good beginner pet. No wonder they are one of the most popular pet birds. Plus they are quite affordable. If you are looking for…